Is Sleep Paralysis a Paranormal Experience? 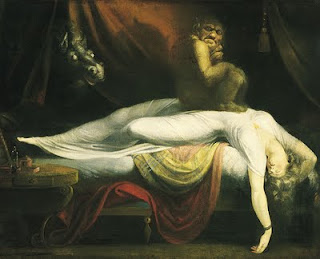 According to Wikipedia, sleep paralysis occurs when a person is falling asleep or waking from sleep.  It is physiologically related to what occurs naturally during REM sleep.  During sleep paralysis one can experience terrifying hallucinations and panic.  They may even think that they were having a vivid dream.  Those that do encounter this state find that it occurs while sleeping on their backs.

Many countries share similar folklore about sleep paralysis.  In Swedish folklore, it is said that it's caused by a supernatural creature similar to a werewolf, called a Mare.  In Turkey, they believe the classic story of a demon visiting during sleep.  A demon, most commonly known as Djinn, holds you down and will begin to strangle you.  Some also say they hear the voice of Djinn.  In Chinese culture, sleep paralysis is known as pinyin, which literally translates to "ghost pressing on body".  "The Old Hag", is a British and North American lore.  She sits on her victim's chest at night making breathing difficult.  The stories are very similar, all pointing to something paranormal.  There really aren't any reasonable or scientific explanations for sleep paralysis at this time.  Sleep paralysis is still being researched.
When I was around 14 yrs. old I had a terrifying experience with sleep paralysis.  As I had mentioned in earlier posts, I had something to be scared of at night.  Imagine the fear of falling asleep when you feel like you're being watched.  When your back faces your bedroom door and you sense a presence behind you.  I never slept with my back facing my bedroom door, and when this did happen I was lying on my back just as the research states.  I had woken up in the middle of the night, but it was as if I couldn't completely wake up.  I could not speak, I could not focus at first; it was as if I was drugged.  My mind became clear and I wanted to wake up.  I tried to sit up but I couldn't.  I started to kick and flay my arms, but it was as if I was being held down.  I felt the pressure on my body.  After only seconds of struggling which seemed like an eternity, I hit my elbow against the wall on my right.  A loud hollow bang seemed to echo in my ears which broke the force that was holding me down.  I finally sprung up in my bed as I dripped in sweat.  Was it a negative energy attacking me in my sleep?  It sure felt real to me.
Posted by Kim at 7:33 PM

Kim
I have had paranormal experiences my entire life. Now, I've decided to come out of the "paranormal closet". Paranormal Confessons is a place where you can ask questions, share experiences and find answers. You are not alone.